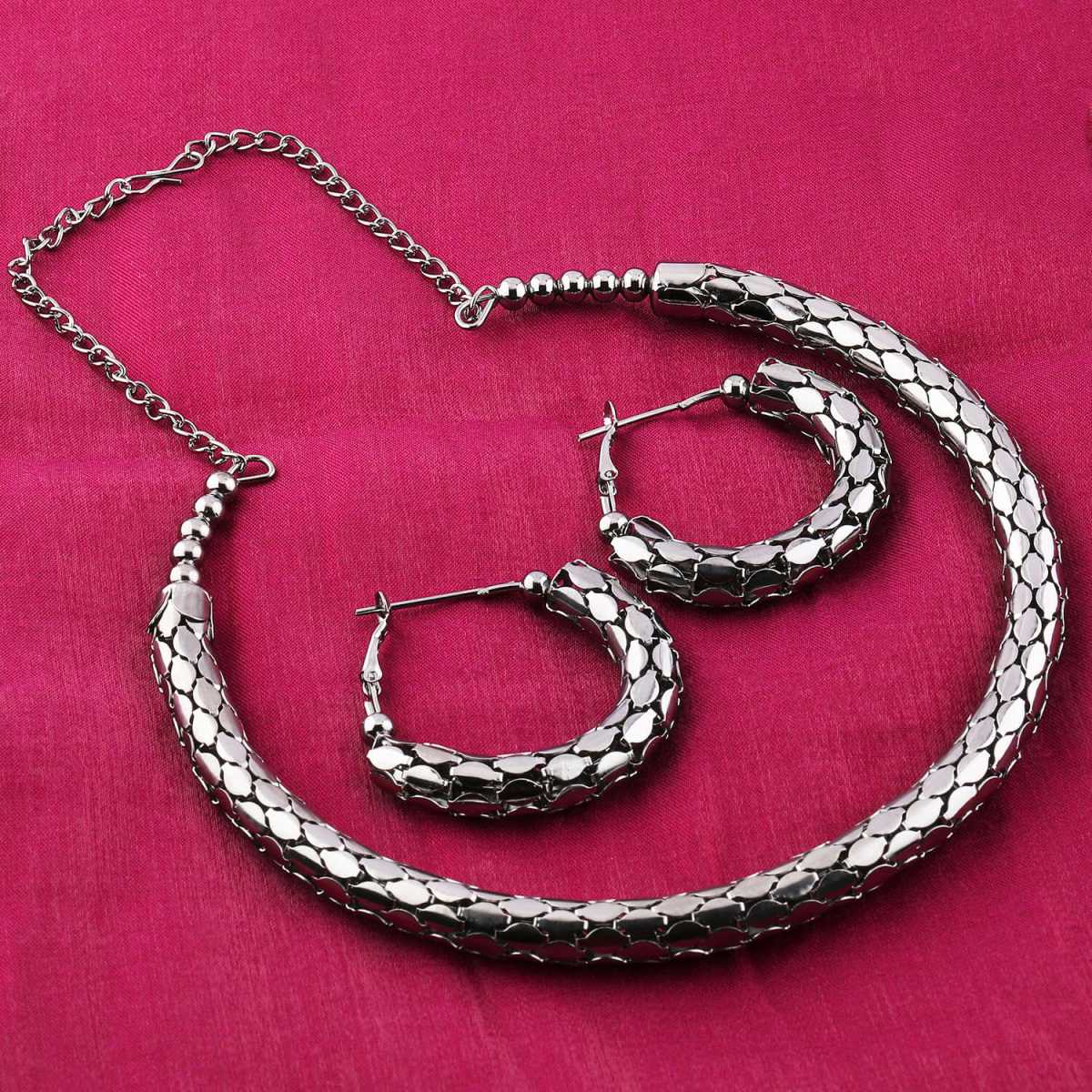 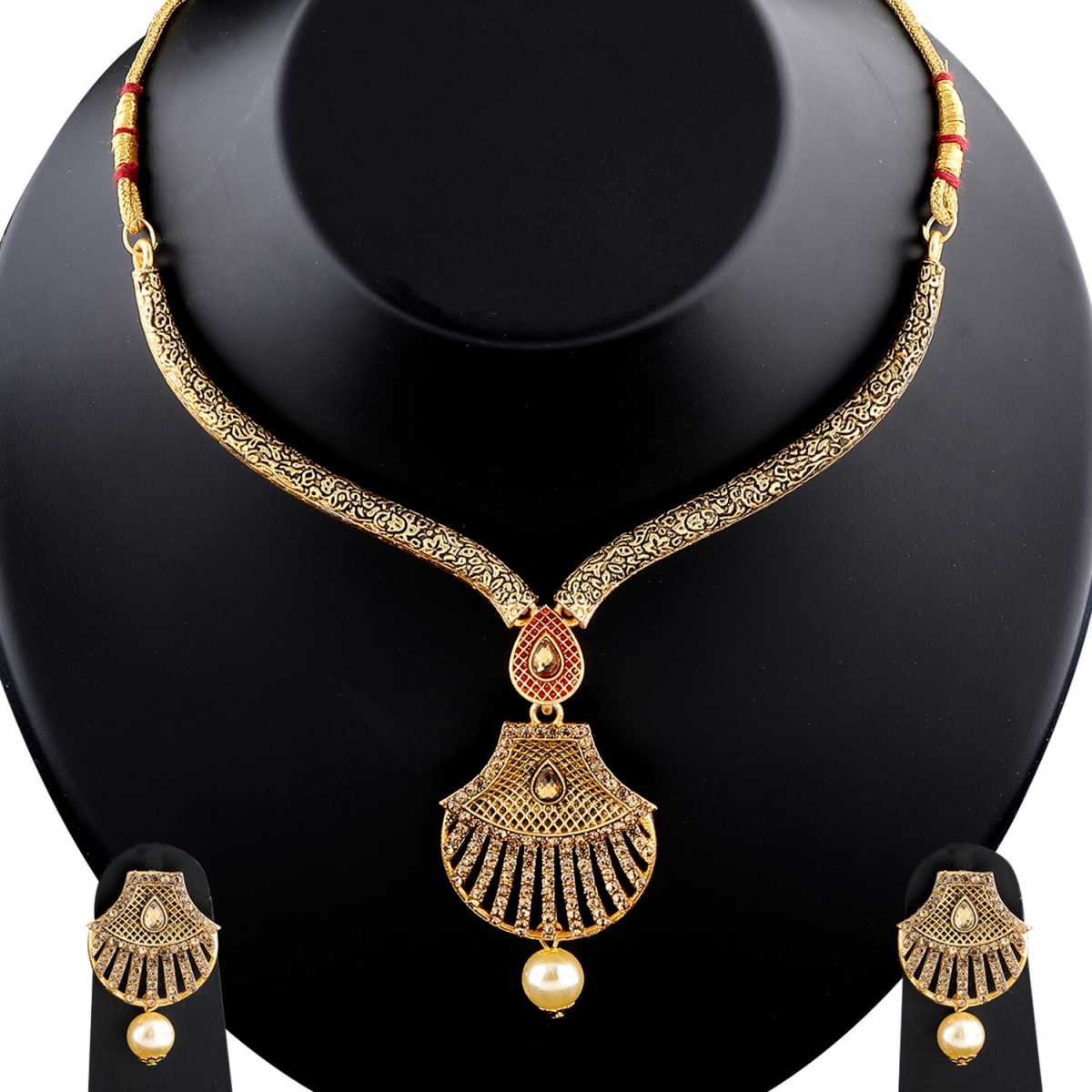 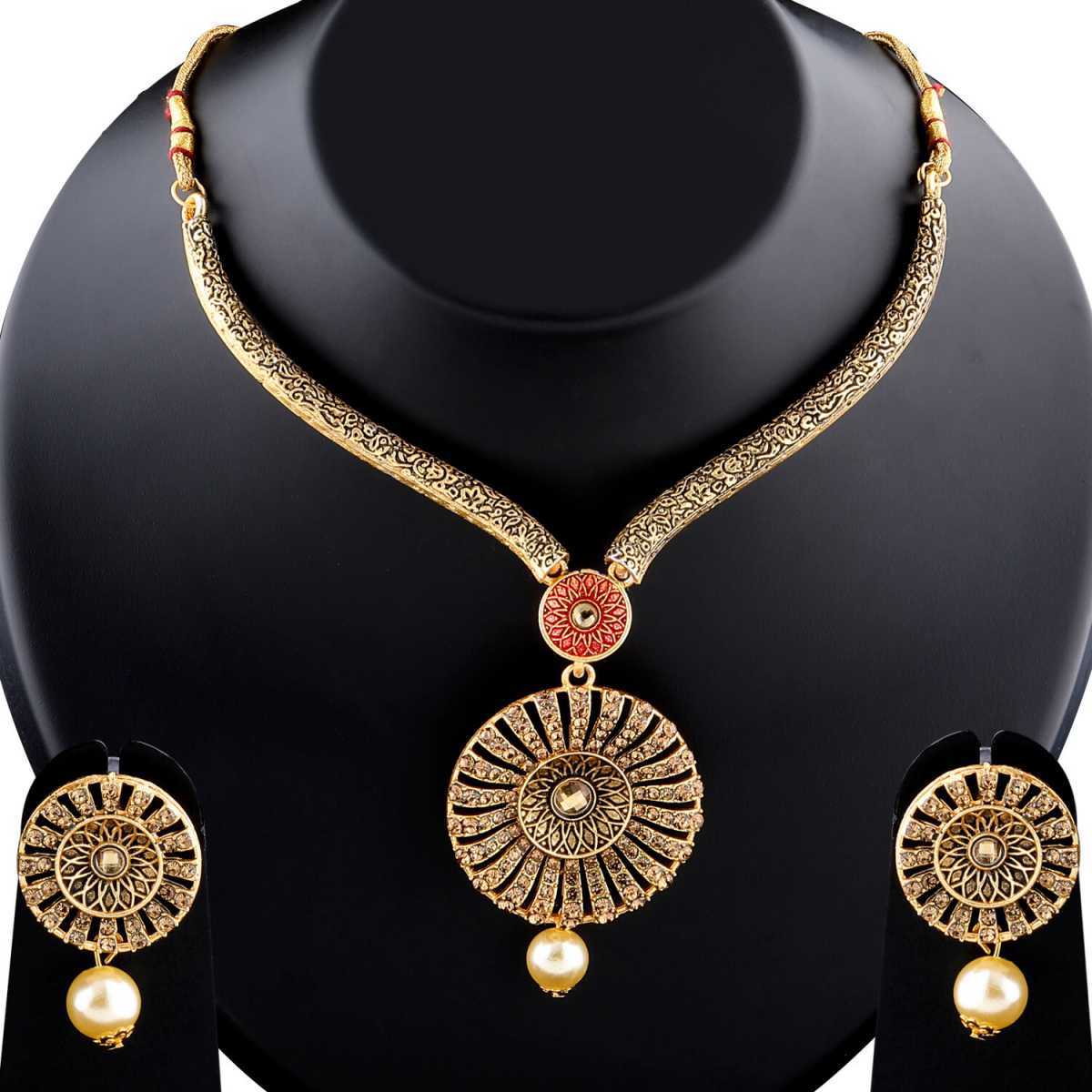 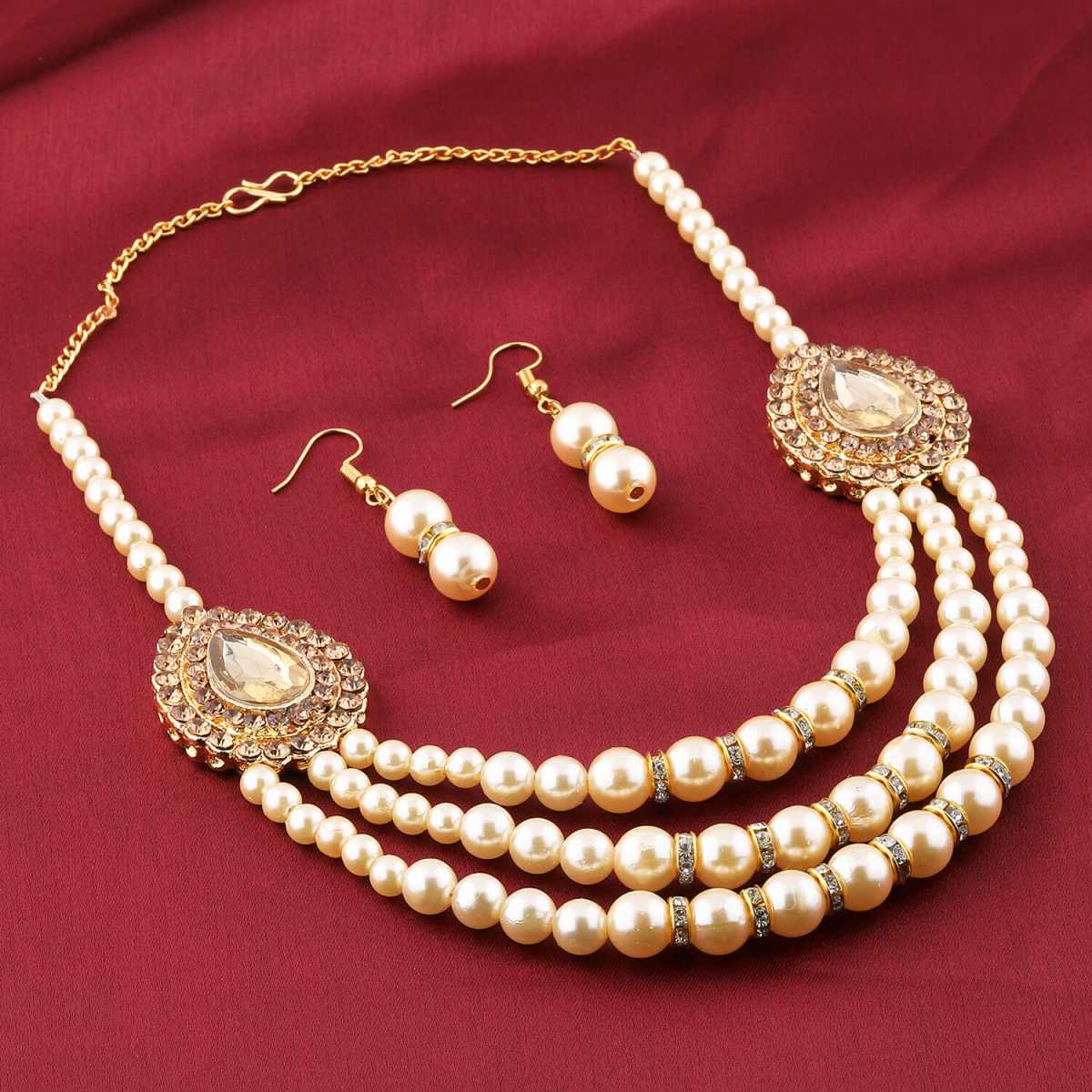 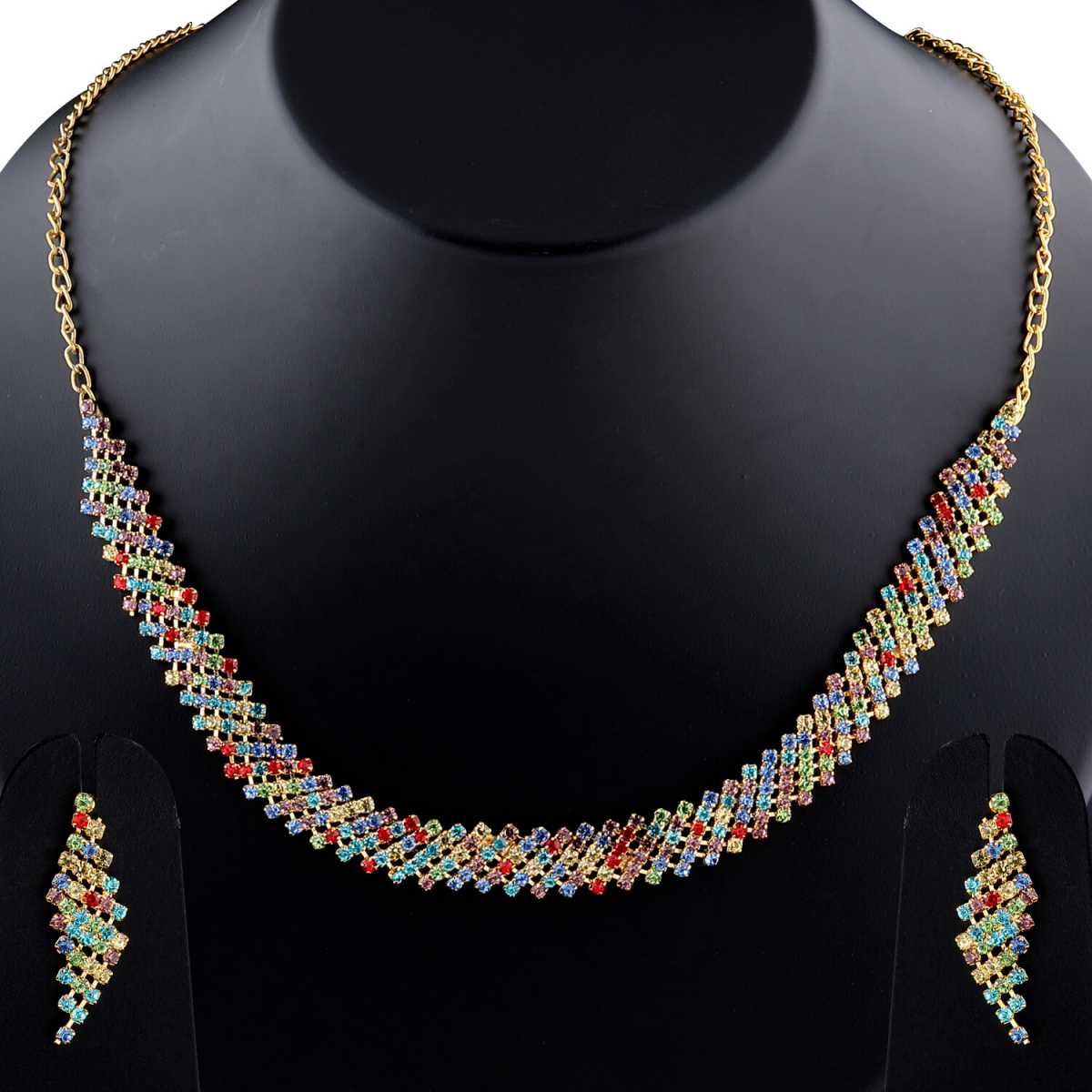 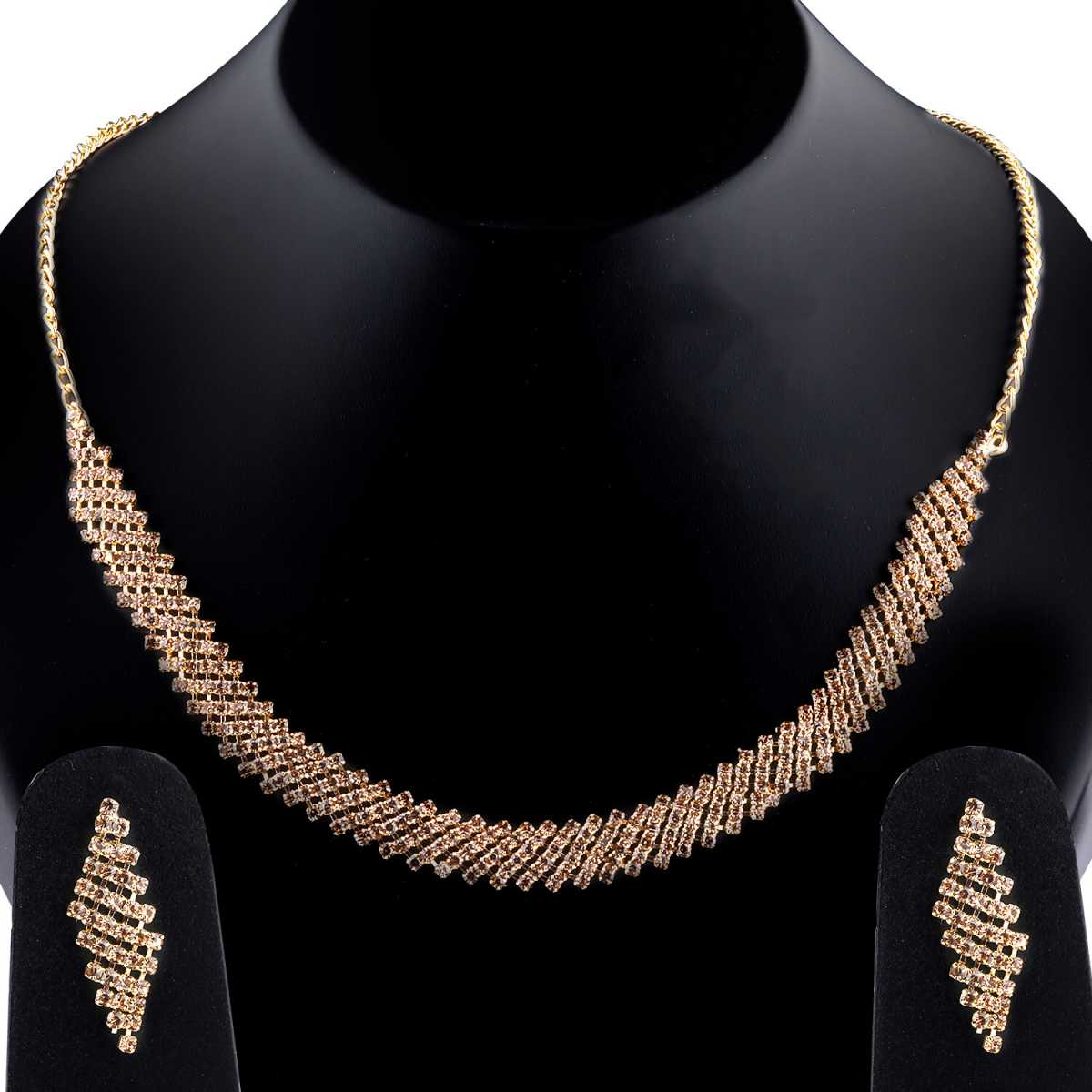 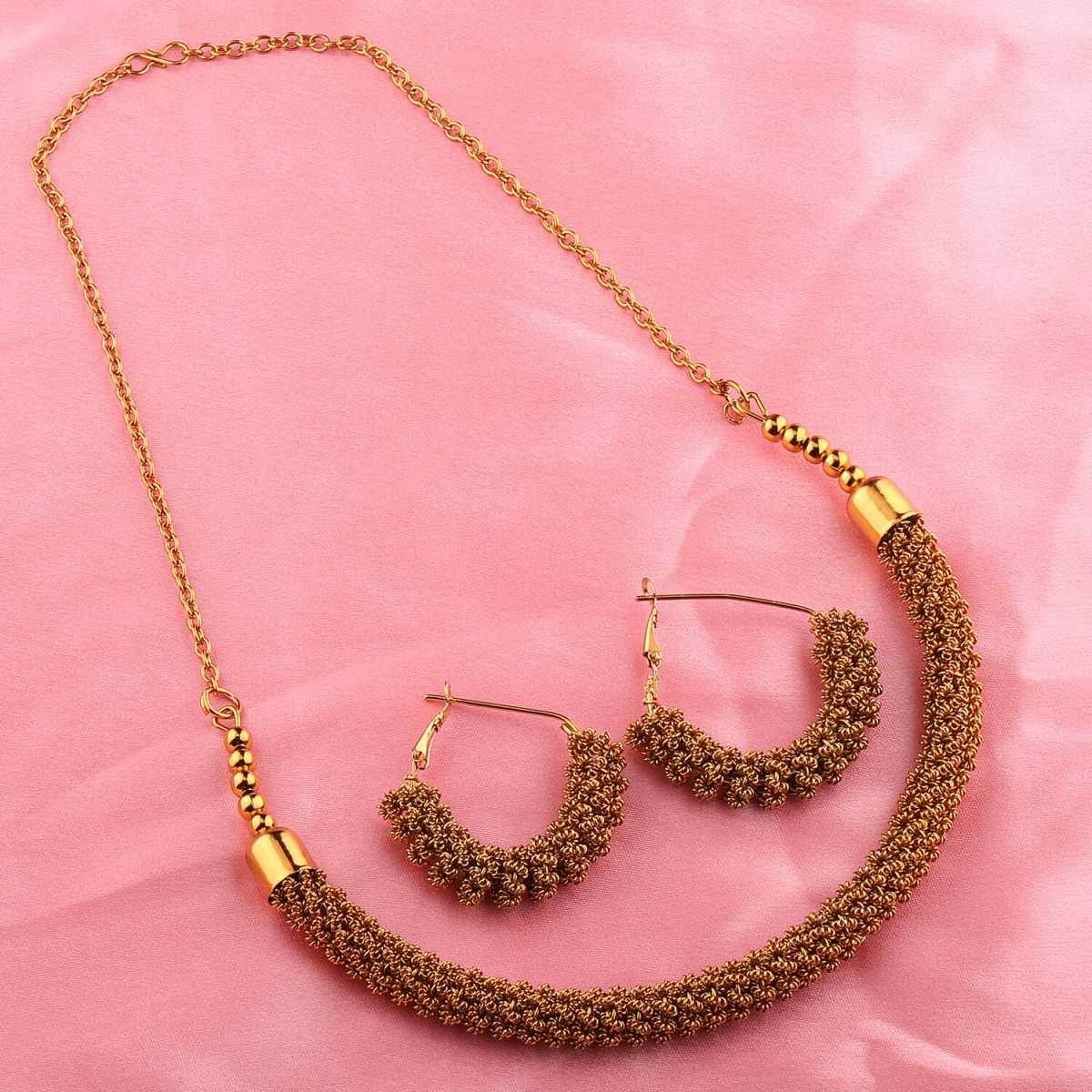 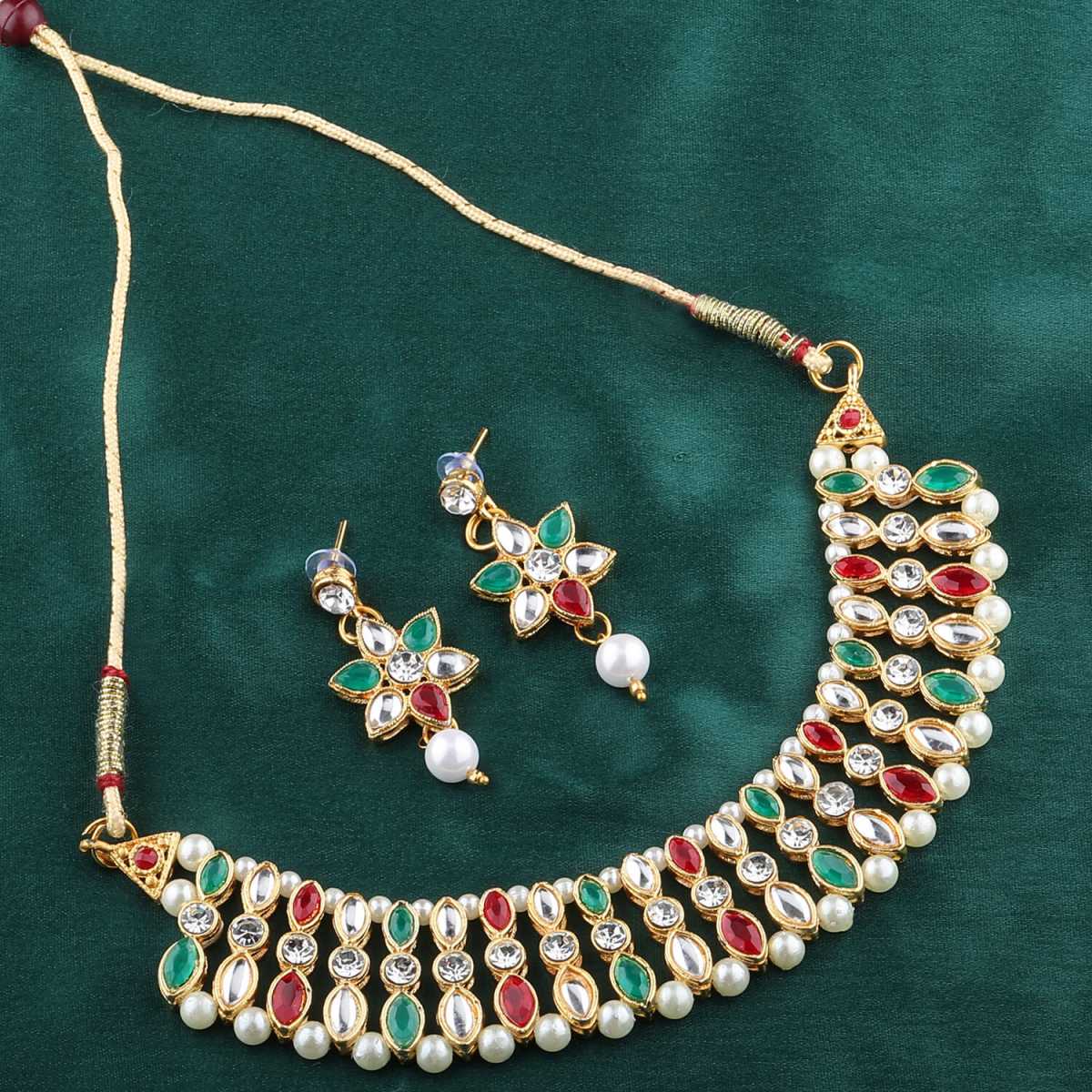 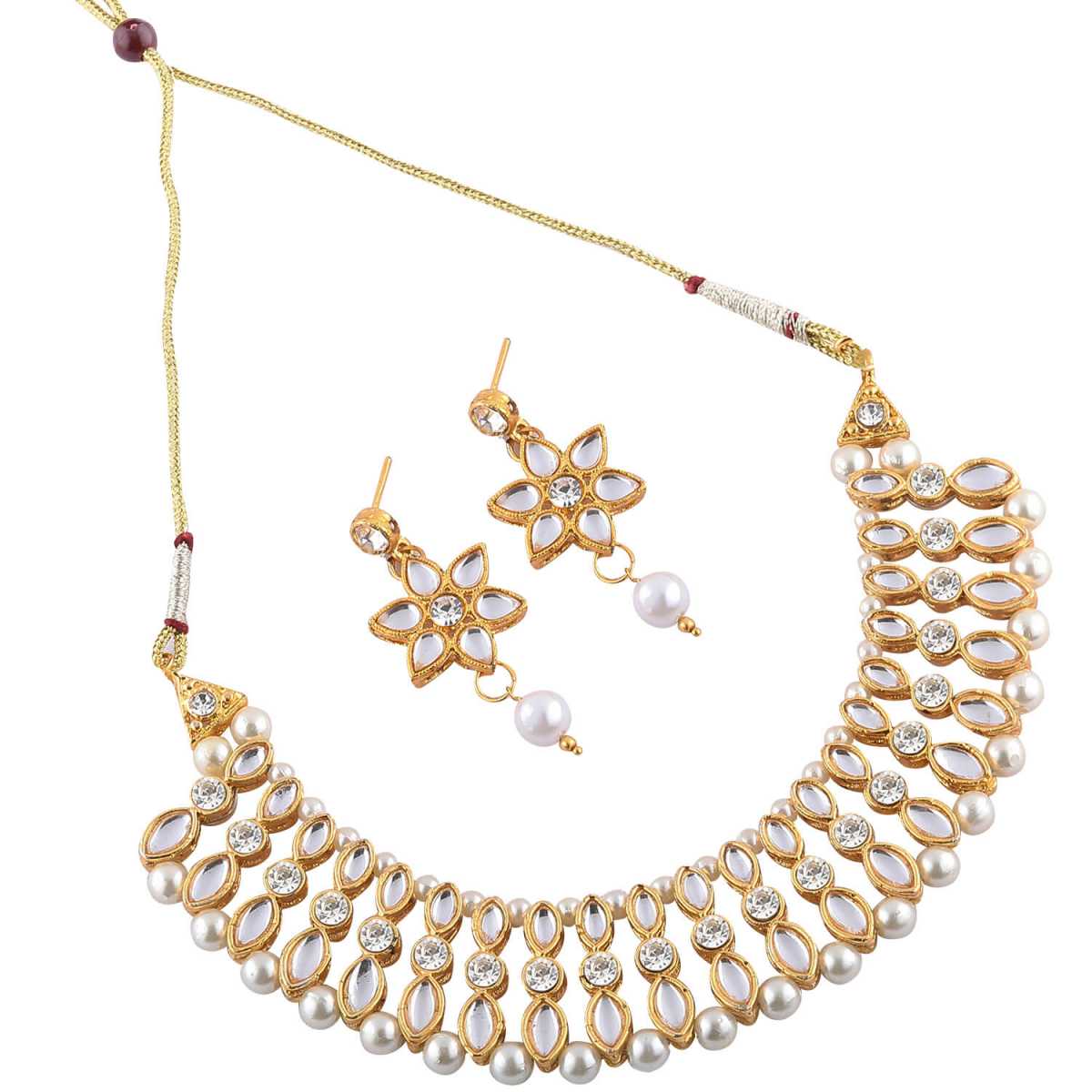 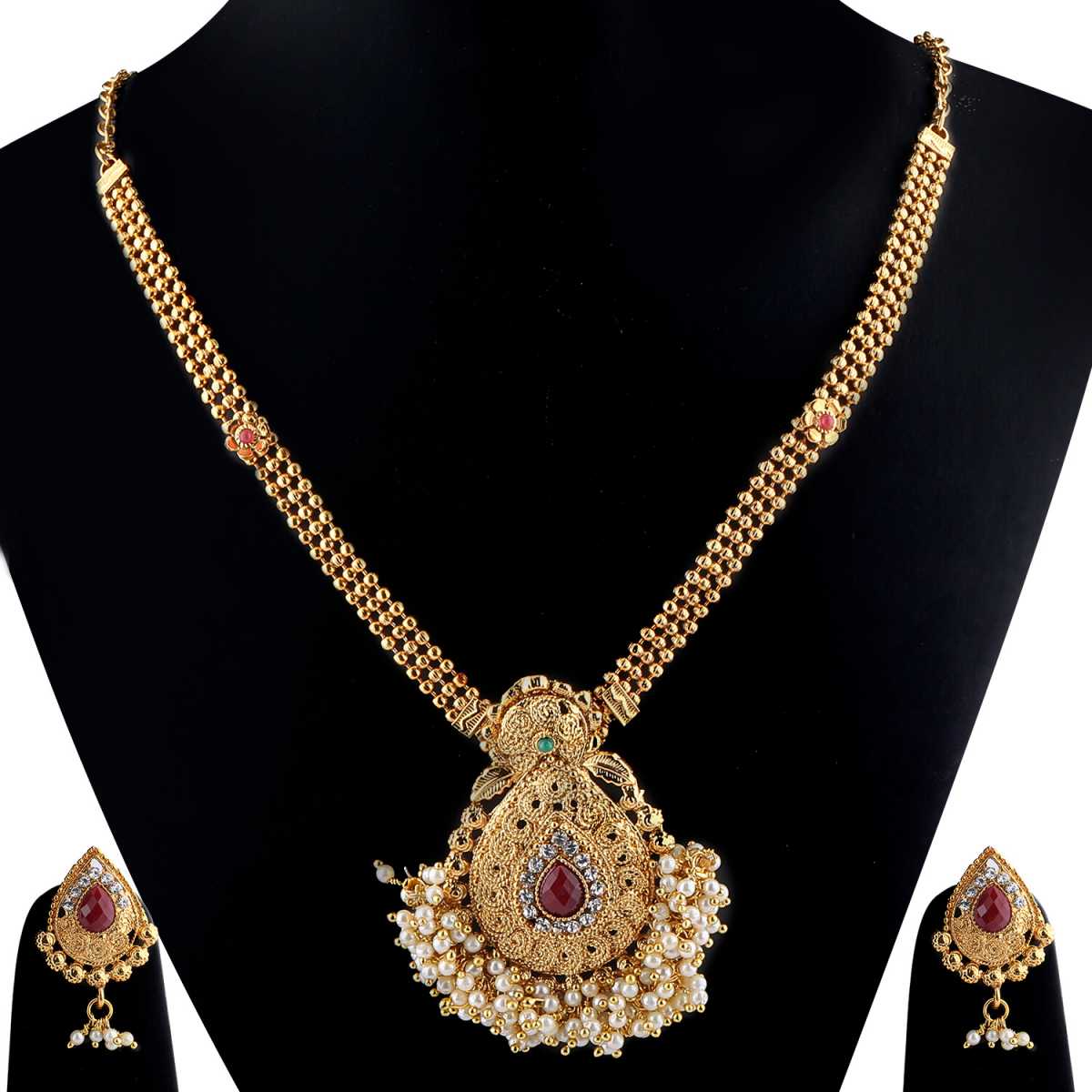 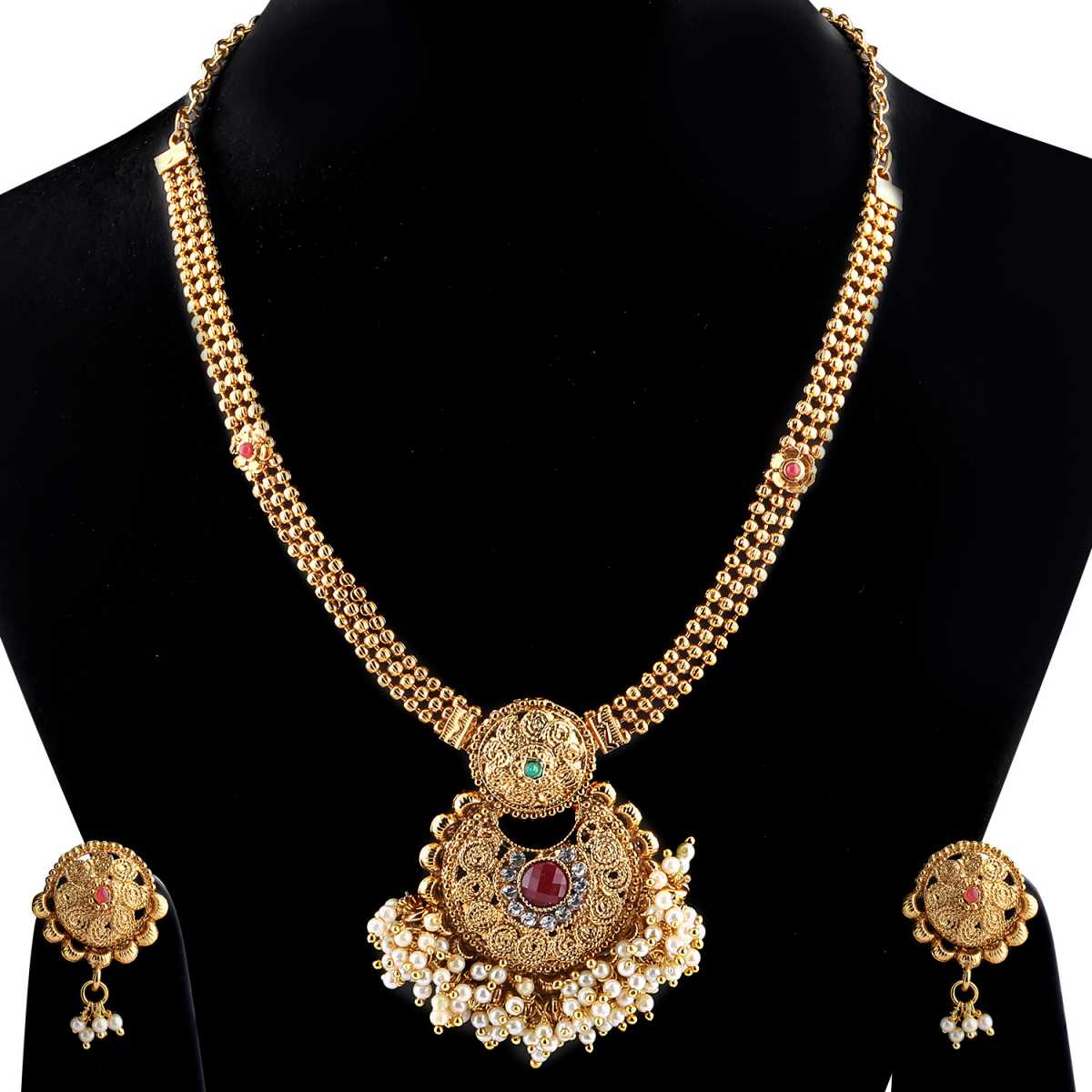 What is a piece of Kundan Jewellery all about?

The newest style that is trending today is the traditional one! You know how we say old is gold? Well that is exactly true in the case of a kundan jewellery piece. The fact that they have persisted all these years and yet remained fresh says a lot about Kundan Jewellery.

What is mentioned below is extremely interesting and represents a great chunk of the history of a piece of kundan jewellery. The Mughals did bring them to us in India and we felt extremely inspired to a point that we ended up creating our own designs and made them customary in our weddings.

Kundan Jewellery in itself became symbol for what we stood for and yet what we stand for today. Our artisans created some of the most innovative designs of Kundan Jewellery even in those days. It is known that a piece was scored under the most nail biting circumstances and the piece was then a piece was carefully dissected to slowly entail the entire process and re-engineer the whole process to understand what goes into making such a fine and artistic piece.

Indian artists are always known for their integrity, devotion and love towards their art culture and hence with a lot of patience and love for aesthetics of kundan jewellery, Indian artisans managed to perfect the art and bring a magnificient design which was ironically found desirable by the Mughals! Orders were places by the rulers, kings and their emperors for Indian traditional kundan jewellery sets and out of nowhere in times of captivity and imperialism slavery turned into minting money. This is how most Indians are, their skills and their art forms can completely change the whole scenario without even anyone realising what just happened.

Creating kundan  jewellery sets needed a lot of patience and will since even to create the first collection of kundan jewellery sets they had to be created behind closed doors since anything and everything in the eyes of the conquerers was pretty much a crime and something as big as this, one would simply be punished with either life imprisonment or completely overthrown from his/her own life. Nevertheless Kundan jewellery choker sets were created by scoring various kinds of materials were somehow plated with a thin layer of gold. It must've been a uniquely overwhelming experience in those days. Indian traditional Kundan jewellery today is very desirable and maybe in a way it is not just because it absolutely impeccable to look at but also has withstood a history that one simply can't fathom.

What is a Choker Necklace Set?

A traditional choker necklace is an ornament for the neck, the length of which is between 14” – 16” depending on the size of a person’s neck. Choker Kundan jewellery sets are almost always a snug fit on the neck, hence the term “choker”, since they nearly seem like they choke one’s neck. These ornaments are generally worn on glamorous occasions like weddings, fashion events, and indoor festival parties. They are generally intricately designed although several young girls love wearing simple fashion choker sets that are not that heavy on design, for example white pearl choker kundan jewellery sets.Heavy choker necklace sets like traditional kundan jewellery choker sets, bridal kundan jewellery choker sets and diamond& pearl choker sets are worn only on the aforementioned occasions.

Choker sets gained popularity in the late 18th century during the French Revolution or that is what most sources claim, although there exists a painting dating back to the early 1500s wherein Anne Boleyn made an appearance wearing a choker with letter ‘B’ pendant. The choker seemed to be made of pearls within the painting although the actual material is still questionable. So all this basically narrows down our heritage of chokers on a global level.

Pearl choker sets and other kinds of choker necklaces kept making a return to trend every now and then, when finally they came to stay with Indian chokers for a timeless stage, but more on that later.
Queen Victoria wore a choker in several of her paintings painted in the early 19th century. People every now and then grew crazy liking towards chokers since either princesses or queens flaunted exquisite either white pearl choker sets or elegant but heavy diamond kundan jewellery choker necklace sets every now in then in legendary paintings that have been known to amount in millions today.

This was pretty much how chokers came into being and have known to come back to fashion every now and then. They are one of the oldest style of jewellery and have certainly gained its ongoing popularity due to the previous Royals.

Before the advent of the Mughal Dynasty in India or then known as Hindustan, there were several jewellery makers created pieces from their own little known knowledge without the intervention of anyone else. They had no influence or inspiration to create jewels from and hence they did what they knew. The Mughals entered, and their women posed tantalizing gold traditional choker necklace set designs that left the jaw-dropped Indians in an absolute awe. They opened a whole new world of inspiration for the Indians. Although most of the Mughals were brutal, Indian goldsmiths and jewellers somehow scored their designs and tried understanding how they were created. This gave birth to a Mughal influenced innovation in Indian choker pearl sets and bridal kundan jewellery choker sets. From here began a journey that has left the world spellbound by Indian jewellery today. They didn’t just feel inspired but were also exposed to the gravitas of an already existing creation that they had no knowledge of. At this point the Indians felt like a dry sponge and soaked in whatever they could. They created their own personal designs made innovation in their methods of creating the same, and the rest was as they say, history.

From the latest gold choker sets to the oldest white pearl chokers, they have remained around us for centuries. Hence,over the years, chokers of different styles have been created to suit different kinds of locations, comforts, and occasions. From the most elegant and luxurious kundan choker sets to minimalist artificial choker sets made of materials other than expensive metals and diamonds, today chokers are a completely different picture.

Big-fat Indian weddings are what have bought chokers back into fashion. Big-fat Indian weddings are almost a way for Indians to show how much money they have. Spending extravagantly, Indian brides that come from the riches love heavy traditional gold and diamond choker sets and latest gold kundan jewellery choker sets that are absolute an marvel to watch. These pricey and classy also contain silver in choker sets to make them as reflective as possible. Those that aren’t able to afford such insanely priced chokers resort to equally incredible looking bridal artificial choker jewellery sets that are undoubtedly breath-taking like Keanu Reeves. A heavy choker necklace setbeing the crown of your neck is easily visible on most types of necks and any person wearing a choker pretty much wants you to notice their choker even before them.

Who can wear chokers?

May it be oxidized kundan jewellery choker sets or any other kind, they are mostly suited on long slender necks that enhance its beauty but we don’t recommend any such disparities. We totally believe in the fact that if you love wearing it -then get them right away! Because nothing should affect what makes you happy. SilverShine believes in spreading happiness and joy without judging anyone’s appearance. If something makes you happy, we not only encourage it, but we try our level best to make it happen. In our view every girls deserves to wear a white pearl kundan jewellery choker set that was once flaunted by queens and princesses. Anything that makes you smile, and lit your day we want that for you!

Our Collection of Choker Sets

Oh! You are in for a treat! Our spellbound collection of latest gold choker sets, diamond choker sets, kundan choker sets and artificial bridal choker sets are sure to make your heart skip a beat or two. Astonishment will be the only reactions that we’d expect! Our mesmerizing collection of gold plated chokers with natural pearls and studded stones will make you daydream about personifying a queen with chandeliers that reflected the light from your gold plated kundan jewellery chokers in a hall of people that lit from the light while you walked across to your throne! These traditional gorgeous textures with hanging white pearls making those gold pearl artificial choker sets will reminiscent you of your wedding days, and take you back on a journey that you’d want to revisit again. Needless to say, if you’re an unmarried girl, well you’d want to marry only to wear stunning gold plated choker necklace online collection that we pose!

Our team curates the whole process, from the moment you lift your smartphone to shop with us to the moment you receive your favourite gold chain choker sets among others and even after that with our return policy. Our team understands what it takes to complete this circle, and keep it running smoothly every time. It is an honour for the SilverShine team to go through thousands of designs on a daily basis only to create unmatchable collections for its customers. Getting choker sets trend tested after handpicking designs is what makes our collection absolutely flawless. With our staff being from different parts of India, designs and aesthetic choices vary, which give you a diverse variety of choice for your different kinds of attires.

SilverShine Jewellery also provides door step convenience by getting your favourite chokers and other items delivered to you through our veteran partners that have millions of deliveries under their belt. Their experience assures you and us that your products reach to you in a timely, safe and accurate manner.